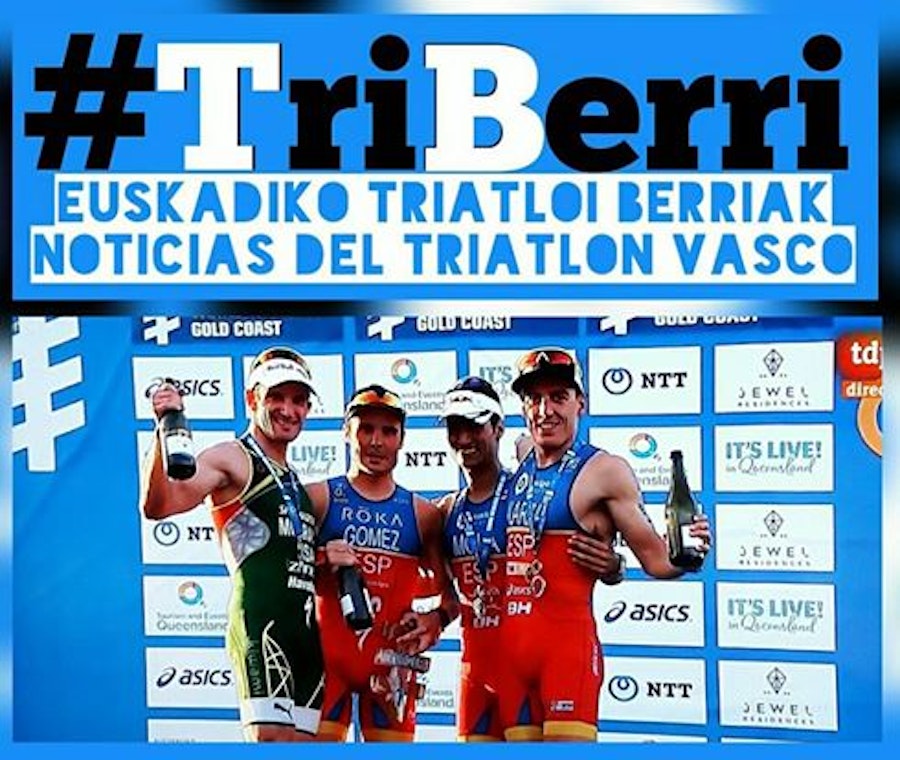 Schoeman had an excellent swim, living up to his reputation in the water. He spear headed the field out of the 750m swim leg with a 3 second lead to Kanute from the USA and another 5 seconds to Sullwald in 8th. Murray followed in 16th with one of his best swims to date, another 8 seconds down from Sullwald.

Schoeman, Murray and Sullwald entered T2 from the 20km bike leg in a group of 33 athletes chasing down Australia’s Ryan Fisher who managed to build up a 15 second lead to the rest of the group.

It was down to the two tri running legends, Murray and Mola, on the run leg for the win. Murray said afterwards that he gave it his all from the gunshot through to the finish line, but could not match Mola’s burst of energy on the run. Murray crossed the finish line 4 seconds after Mola, clocking a dangerously fast 2min51sec/km average on the 5km run course to claim the 2017 WTS Gold Coast silver medal. Schoeman and Sullwald crossed the finish line shoulder to shoulder. Schoeman placed 8th and Sullwald 9th, both 36seconds down on Mola’s win.

Triathlon South Africa’s Elite men are currently at an all time high. Sullwald is at long last starting to reach his athletic potential after the series of setbacks he had health and injury wise. He also managed to perform exceptionally well under less than ideal circumstances at the Gold Coast with a virus still luring and his bike having arrived only three hours prior to the race. Both Murray and Schoeman keep performing consistently well with Murray having a solid hold on the podium and it seems he is not releasing his hold.

It is also the first time in history that South Africa has three Elite men (four with Sanders from the Elite ladies included) listed in the top 15 of the World Triathlon Series rankings. Murray is currently listed second, Schoeman 5th and Sullwald 14th. Sanders is now listed 15th on the Women’s WTS ranking.

Both Sullwald and Schoeman will toe the start line of the 2017 ITU World Triathlon Yokohama in Japan.

Gillian Sanders notched up her 2017 WTS ranking with 5 points in Saturday’s WTS Gold Coast event with a strong performance on the bike and run legs.

Sanders exited the 750m swim in the back of the pack, 46 seconds from Spain’s Routier, who was in the lead out of the swim leg.

Within the first two laps on the bike leg the main chase of 19 athletes, including Sanders, managed to close the gap to the lead group of 10. This is just what Sanders needed in order to pull it off on the run.

Sanders proved to be a force to be reckoned with on the run leg. Sanders powered across the 5km run leg at an average speed of 3min24sec/km to cross the finish line in 9th position, 34 seconds behind Hewitt’s win.

With Sanders being a talented runner, the shorter race distance suits her well. Time lost on the swim leg can be made up easier on the bike/run legs. Sanders mentioned after the Dubai WTS event beginning of March that she was feeling good about her form for the start of the 2017 Triathlon season compared to previous seasons. This is showing in her 2017 WTS events performance.

After the Gold Coast event of the past weekend Sanders is now ranked 15th on the 2017 WTS ranking on the ITU scoreboard. Triathlon South Africa’s best performance to date on the WTS scoreboard for RSA’s Elite ladies was when Marie Rabie ranked 16th at the close of the 2016 WTS season. Sanders started the 2017 season off well and is showing good promise for a top 20 on the final 2017 WTS ranking score board.

Anel Radford and Gillian Sanders will be heading to Japan for the third stop of the 2017 ITU World Triathlon Series in Yokohama mid May.